The Trouble With Women’s Hockey

This Olympics has brought back the debate over the long-term survival of women’s hockey as an Olympic sport. It is a sport that has been dominated by the Canadian and American teams since its inception, with Finland as the near constant third place team. It’s not just that Canada and the US win all the medals; it’s how they do it, with games like the recent US-Switzerland game with saw poor Florence Schelling, well, shelled and a 9-0 score. It’s games like 2010’s Canada-Slovakia game that had a embarrassing score of 18-0, or the United States-China game that was 13-0.

These scores are the reason the tournament format has been changed for the Sochi Olympics, with the best teams competing against each other for seeding rather than beating up on teams like Germany or surprise-inclusion Japan. These scores, athletes have said, are bad for the sport. And maybe they are, but that doesn’t mean that women’s hockey should be taken out of the Olympics. The problem runs much deeper than that.

Hockey in general is a sport that’s growing. Maybe not in Canada, where the high costs of rink time and equipment as well as the overstifling air of “you have to make the NHL to make this investment worth it” are leading to a decline in youth hockey participation, but around the world participation is rising. This includes places like South Korea, which will be hosting the 2018 Olympics, that are probably considered “non-traditional markets” in the global sense. Unsurprisingly, men overwhelmingly outnumber women in ice hockey (except, oddly, in North Korea). Women’s hockey, like many women’s sports, is given short shrift.

The lack of women’s programs has led to women and girls participating in men and boys’ hockey as part of their developmental path. Julie Chu and the Lamoureux twins are two from Team USA who played with boys in their youth, and Shannon Szabados played for junior boys’ teams, including one game where she outplayed Canadiens netminder Carey Price.

In theory, I like this. I like the idea of the sport becoming co-ed. I dream of the day where the NHL will include female stars, and not just for a publicity stunt like Manon Rheaume’s brief stint as Tampa Bay’s goalie during an exhibition game. (Not to do down Manon Rheaume, mind you, she was awesome.)

Yes. For those asking, we have contacted @usahockey Womens team to see if any goal scorers are available. pic.twitter.com/VzNPbyKtpz

Currently, there is a women’s professional league: the CWHL, which was founded in 2007 and competes for the Clarkson Cup, which is now displayed at the Hockey Hall of Fame. (There’s also the WWHL, but it has only two teams.) Its precursor was the National Women’s Hockey League, which disbanded after a few of the teams split off to form the WWHL due to costs of travel. And this is where we come to the real problem of women’s hockey: money.

There was an amazing article posted at The Pink Puck about the importance of the gold medal to women’s hockey players. They have their Clarkson Cup, sure, but playing the CWHL is not easy. The CWHL cannot afford to pay its players. Let me repeat that: The CWHL cannot afford to pay its players. Only recently have they been able to pay for meals on the road and buy more seats on flights so the players don’t have to pay out of pocket. The budget for one team is 200k. The average salary for an NHL player two years ago was 2.4 million, more than ten times the budget for a CWHL team. 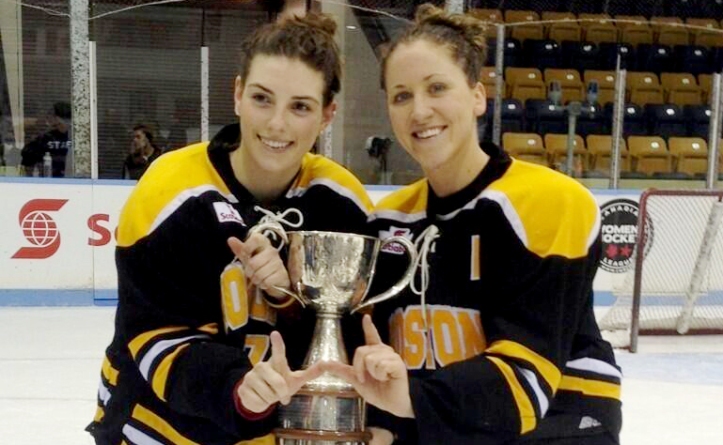 And there are no godforsaken playoff beards in the CWHL.

Many women’s hockey Olympians are students, which is why the rosters of teams like Japan and Russia skew young. Women who are no longer students frequently have to work extra jobs to be able to afford training. On Team Japan, members worked seven days a week delivering pizzas, and worked at sporting good stores and convenience stores. Famously, one of Team Switerland is a barista working in the United States, which is a cool story until you realize that she picked that job so she’d be able to train in the afternoon. The players and staff of CWHL teams work day jobs.

Of course, this is part of the growing process of most sports — which is fine! Women’s hockey is going through growth and it’s completely natural. Men’s hockey went through it to. (They went through the years of dominance by a few teams, too, as this comment points out.) We’re already seeing some signs of growth, with Team Japan making the Olympics and doing surprisingly well largely on the back of their goaltender, Nana Fujimoto. We’ve seen Finland drive Canada to fits. It’s clearly improving, admittedly slowly, but it is improving. The difference is that when men’s hockey went through this, they didn’t have the advantage of an already established league and worldwide sport to give it legitimacy. It didn’t have another league that people could compare it to and find it lacking.

People look at women’s hockey and compare it to men’s hockey and say, “It’s clearly not as good; we should get rid of it,” when it’s impossible to compare the two. Women are not given the support as they come up through the sport. They may start in boys’ hockey if there’s no other options, but once they reach teenage-hood, they’re shoved to the girls’ teams, which receive less funding, less attention, and less respect. We talk about how crappy the other teams in the Olympics are when Germany had to qualify for the Olympics to keep their funding and they’ll still need to place above sixth to keep the military from reducing funding. This is presented as a problem with women’s hockey. It is and it isn’t. It’s really a problem with the treatment of women’s sports in general and the lack of patience and imagination from people who help fund these teams.

Saying “women’s hockey simply doesn’t have the funding to continue and therefore it’s useless” is ridiculous. We have to give women who play hockey more chances. We have to provide them with quality competition and training from the very start. We have to give them the time and the facilities and the equipment to train properly. The male athletes that attend the Olympics now are professionals who play hockey as their one and only job. Of course the quality is going to be higher when compare to women who have to keep long-hour day jobs in order to simply afford their passion. There’s got to be a way to make it easier, worldwide, for women to participate in the sport they love.

Choa Choi plays on a men’s team in South Korea.

Lace Bite, a documentary about forty women who played a continuous game of hockey for 10 days to raise money.

Hwangbo Young is a Korean skater who escaped from North Korea with her family before becoming a South Korean women’s hockey icon.

The Game of Her Life, a documentary on Canada’s women’s team at the 1998 Olympics.