A Love For All Seasons: Friendmances in Hockey

Are there any friendships like there are in hockey? What other friendships involve exchanging teeth? Or apparent total co-dependence? Or hugs so popular they are commented on by actual play-by-play announcers?

In this vein, we invite you to celebrate a few of the best and our favorite friendmances in hockey. Come in, share the love.

Let’s be real here: who isn’t PK Subban friends with? At least, that’s how it seems sometimes when he casually mentions being friends with Brad Marchand, oh, and did you know he and Steven Stamkos used to play on the same team as kids? 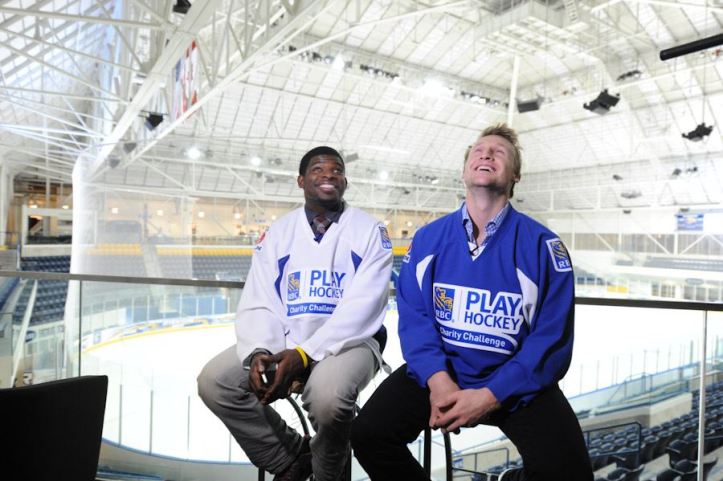 He’s also famously friends with Carey Price (though he seems to like to show that love by annoying Price as much as possible), so much so that their traditional post-win celebration, the triple low-five, was banned by sourpuss coach Michel Therrien. Am I bitter? I AM DEFINITELY BITTER.

And of course, he’s buddies with John Tavares, has made Sidney Crosby smile, and regularly play-fights with teammate Brandon Prust. Not to mention he took the world’s most epic Instagram video with his Canadian teamates just after winning gold in Sochi.

Is this cheating? Maybe it is a bit, and I’m sure the Canadians are just as loving as our American girls, but we’re biased here and we’re not afraid to show it. Given they live out of each other’s pockets for one year out of every four, the time spent together for international competitions, and the fact that the women’s hockey world just isn’t that large, it’s no surprise that the women of the US National Team are tight.

This is too many Sochi memories for one day, someone please save me.

If you follow basically any of them on Twitter, it’s impossible to miss how supportive they are of each other and how much they admire and adore their teammates.

So proud of @_aschlep for her NHL practice debut with @TBLightning! You are one of the best representations for @usahockey #legs

So sad to leave florida today! hilary_knight and I had a great time training with @_aschlep can't wait… http://t.co/CyTNMRwSYP

Of course, they are hockey players, so there are the obligatory pranks and goofing around, too:

They’re hockey players. That’s how they show their love.

Remember I mentioned the “giving each other their teeth” thing? This is something Duncan Keith reportedly claims he did with the teeth he lost during the 2010 playoffs, and if anyone can find me the tweet or video where he says that I’ll slap a link up here.

The two are former roommates and still live close enough to carpool. Since it is a hockey friendship, it comes with a great deal of chirping and some mild physical violence.

“I joke around about that sometimes — it’d be funny to see them in 40 years, sitting around on the porch and just swearing at each other,” Hawks defenseman Johnny Oduya said. (Keith, Seabrook know how to push one another’s buttons)

Like many a defensive pairing, it’s hard to mention one without the other, and they seem to be fine with that, even if Seabrook wasn’t invited to Keith’s wedding (awkward). They even appeared on an episode of Chicago Fire together. If that isn’t true friendship, I don’t know what is.

Part-time teammates, part-time rivals: ripe grounds for a dramatic Disney Channel film. Ouellette and Chu have both served as captains for their respective national teams, and both now play for the CWHL’s Montreal Stars. Despite the fact that they are frequently pitted against each other in international competitions, the two are close, spending lots of time together off the ice and doing awesome things like hosting girls’ hockey clinics in their spare time.

Carnegie Deli in NY city w @juliechu13 so worth the wait! Got treated to dinner by neighbors from Ohio #PayItForward pic.twitter.com/LLWQ7zIuCf

The tide snuck away from these guys today… #LowTideProblems pic.twitter.com/T0HXzlRZma

What a game! Congrats Kings for a deserved win! Cant believe i witnessed that! #unbelievable pic.twitter.com/AbVjik0TZ6

You gotta respect a relationship that crosses international lines like that. No handshake line threats for these two, unless it’s to remind the other one that she was promised a steak dinner if she won.

Could there be anyone else (for this blog)? We have demonstrated a consistent bias for these two players in general and is there any wonder? At their height, they were one of the most incredible tandems on the ice, and one of the most classic cases of “opposites attract.”

Before we get started, let’s just take a moment to appreciate how well they played together:

On a side note, why does every hockey highlights video have to have terrible music over it? Is there no game audio anymore?

Moving on…Kariya and Selanne met at the 1996 NHL All-Star game, where Kariya was an injury replacement for Pavel Bure. The story of their first meeting during player introductions has been well-told by Selanne, and goes something like this:

“Every time a player was introduced, I’d elbow Paul and say, ‘What a player he is. Unbelievable,’ ” Selanne said. “Then the next player, he’d elbow me and say, ‘How about him? Unbelievable.’ Then they introduced Mario Lemieux, and we said, ‘Do you think he’d give us his autograph?'” (Selanne Plows Ahead as Ducks’ Icebreaker)

Kariya’s enthusiasm for Selanne’s play and personality was part of the reason Ducks’ GM Jack Ferreira made the move for Selanne, which is still bemoaned in Winnipeg to this day. After the two were separated by trades, the two pulled the Suter-Parise almost ten years before those two, and orchestrated signings that brought them to Colorado. Sadly, this didn’t work out in a Cup for them, and the two would never play on a team together despite Selanne lobbying for Kariya to be a Duck back in 2010.

Definitely make time to watch Sel8nne if you’re a fan. Or even if you’re not, which I’m not sure is possible.

Despite this, the two are close friends, Kariya even deigning to appear both in Sel8nne (which has the gem line from Selanne of “I got half of my pay for playing and the rest because I taught Paul to be a human”) and at Selanne’s last regular season game, only his second visit to the Honda Center since his retirement.

“He promised to come,” Selanne said. “I talked to him for one hour on the phone. I didn’t take no for an answer. He was the only player I invited. All my best years, and the chemistry I had with him, I could never even dream about having that kind of chemistry with another player.” (Ducks’ Selanne shares spotlight in his final regular season game)

Selanne jokingly said he’d kill Kariya for having previous plans the night of his jersey retirement; and indeed, many people said it didn’t quite feel right that Kariya wasn’t there on the ice with Selanne and Giguere and Kurri. But the fact that Selanne can joke about it so easily just testifies to the strength of this nearly twenty year-long friendship.

Visit our twitter at @hiheelshisticks where, among other things, there are a couple hockey Valentines and some Public Displays of Hockey Affection.