Bracketing by the Numbers

Look. I am very bad at predictions. All you have to do is look at our predictions for this year, where amongst other things I said the Bruins would be at the top of the Atlantic and the Flames would be bottom of the Pacific. We all make mistakes. (Oh my god look at that thing, we were so wrong about everything. The only thing I got right was that Evander Kane did finally escape Winnipeg.)

Part of what makes preseason predictions challenging is the lack of data we have to go by. We don’t know what injuries or coaching changes or trades are going to do to affect each team, and in some cases that can be a huge difference maker (see: Boston Bruins). The postseason is, to some degree, a little easier to predict because we do have data although the injury thing is probably doubly as impactful. In the past, I’ve gone with my gut or by my emotional attachments to teams when filling out my bracket and that has gotten me exactly nowhere. So this year I decided to look at the numbers and choose my bracket that way. Whether or not this will actually work is hard to say, but here it is: 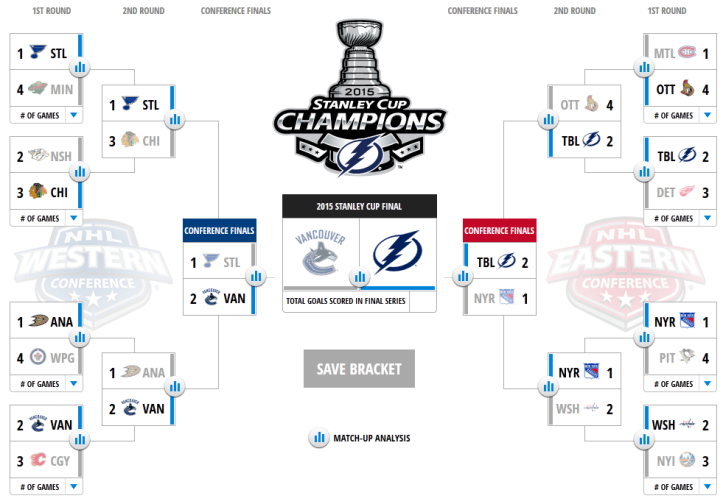 To spare you my deranged scribbling, which Andrew Hirsch compared to John Nash, I present a pretty version that is actually legible.

I am not actually the stats person on this blog. That would be the domain of @tashaebm, but I’m gonna just take a stab at it with basic stats and explain my logic for the first round match-ups and some thoughts on the rest of the series (serieses?). All stats are taken from the NHL website, which by the way took me way too long to figure out how to use. I miss Extra Skater.

The Numbers: When looking at their stats, they’re not too dissimilar. They score a similar number of goals per game, though St. Louis has a slight edge (STL 2.92, MIN 2.77), and allow a similar number of goals (STL 2.4, MIN 2. 42). Their possession numbers are basically the same (STL 51.68, MIN 51.04), and while St. Louis takes more penalties, Minnesota’s powerplay is the worst of any team that made the playoffs at 15.8%. The season series was tied at 2-2.

The Wild Card: Devan Dubnyk, who was in net for both of Minnesota’s wins against St. Louis and boasts stats significantly better than Brian Elliot with a 2.07 goals allowed and .929 save percentage to Elliot’s 2.26 and .917. However, Minnesota has ridden him hard since they traded for him in January (for a third round pick!) and he’s played every game except one since then. That’s tough, and it’s hard to say if he’s going to burn out or not. If he does, the Wild’s backup is Darcy Kuemper whose stats are much less impressive with 2.60 goals allowed and .905 save percentage.

My Pick: Ultimately, I’m going with St. Louis because I think Dubnyk’s going to struggle eventually with the amount Minnesota asks of him and St. Louis has enough of a slight edge in other categories that they’ll come out ahead. I do think it’ll be a long series, but in the end I don’t know if Minnesota’s heavy reliance on Dubnyk is going to pay off.

Of course, every damn year when I pick the Blues for anything they disappoint me, so watch the Wild win in five.

The Numbers: Tasha has been saying all season that Nashville’s strong start was unsustainable and given their losing streaks in the second half of the season, it seems she’s probably right. They’re rocking a high PDO (which is on-ice save % + on-ice shot % and basically amounts to measuring luck, with the mean being 1000), and while at first glance they have better numbers in terms of goals allowed and goals per game, they lost three out of four games to Chicago this series and have slightly lower possession.

The Wild Card: Patrick Kane, out with a broken collarbone a couple months ago, is slated to come back in Game 1 against Nashville. Whether he’s actually read to come back or not is anybody’s guess, and if he’s healthy and sturdy, he could be a huge game changer. There’s also the matter of Pekka Rinne, who has been second only to Carey Price among goaltenders with a significant number of games under their belt.

My Pick: My heart wants to pick Nashville, but I think Chicago is simply the better team and if Patrick Kane is back, they’re only going to be stronger. It’ll take Rinne standing on his head to fight off them off, and while I’m not completely ruling that out, Chicago will probably take the series.

The Numbers: This one to me is kind of odd. While Anaheim swept Winnipeg in the season series, they have similar numbers overall and Winnipeg actually allows fewer goals than them. Between Hutchinson and Pavelec, the Winnipeg has better or equal goaltending to Anaheim.

The Wild Card: This is one case where I’m wondering which goalie Winnipeg will use. While we all malign Ondrej Pavelec (with good reason, to be fair), he’s had good numbers this year. Whether that’s all up to luck remains to be seen.

My Pick: I’m picking Anaheim just because they did take the season series, but I could see Winnipeg making this an upset if they keep themselves disciplined.

The Numbers: All logic says this should be easy. While they have similar goals allowed and goals per game, Calgary has a PDO of 1011 and possession of 44.43%, while Vancouver is nearly 50% while having a PDO of 994. If life follows stats and Calgary regresses while Vancouver improves, Vancouver should easily beat the plucky upstarts from Alberta.

The Wild Card: Calgary have been uncannily lucky this year. We all predicted them bottom of the heap and Mark Giordano going out with an injury for several months was supposed to spell their doom. And yet here they are. The goaltending is arguably better in Calgary than Vancouver, though neither team really has a standout number one, in my opinion, so a little luck and good goaltending might go a long way.

My Pick: Vancouver. I just can’t pick Calgary. I’d like to, because it would make a good story and also Johnny Gaudreau, but over seven games, their luck should run out.

The Numbers: Due in large part to the fact that Carey Price is clearly some kind of witch, Montreal has some incredibly goaltending numbers. Then again, so does Andrew “The Hamburglar” Hammond. What is important here is that while Price is great, Montreal has below 50% possession and a PDO that is somehow higher than Ottawa who was winning at a .800 clip to end the season. Ottawa also took the season series three to one, two of those wins with Hammond in net.

The Wild Card: Two words: Carey Price. He’s been ungodly this year and is the primary reason Montreal even made it to the playoffs. He’s the kind of goaltender who looks around, sees his team, says, “Whatever, we’re winning anyway.” Hammond started at an insane pace but has regressed a little, but then again Ottawa is riding pretty high on those last few weeks where they kicked the Bruins out of the playoffs and nearly the Penguins, too.

My Pick: I’m going to regret this, but I’m picking Ottawa. Max Pacioretty of Montreal is currently injured and might be back for the series, and that could be a boost, but Montreal’s over-reliance on Price plus the fact that Ottawa has beaten them recently pushes me in their direction.

The Numbers: Tampa Bay has the highest goals per game of any team in the playoffs at 3.16, which is the main key here. Most other stats, even goaltending, is fairly close between these two teams, but Tampa Bay won three of four games against Detroit this season and they can just put the puck in the net (though perhaps some of that is due to luck, with a 1010 PDO).

The Wild Card: Ben Bishop, who has never played in the playoffs, and whose absence was named as the key reason Tampa Bay was swept by Montreal last year. He’s doing reasonably well this year and was in net for all three wins against Detroit, boasting a .921 save percentage and a 1.97 goals allowed in the season series.

My Pick: My main concern with the Red Wings is that Pavel Datsyuk and Henrik Zetterberg are no longer spring chickens. At 36 and 34, respectively, they still lead the team in points and there’s always the possibility of one or both of them getting injured. I’m picking the Lightning over them.

The Numbers: Okay, yes, New York has the highest PDO in the league at 1019. However, they are still scoring significantly more per game than Pittsburgh (3.02 to 2.65) and take far less penalties than the Penguins. New York took the season series three to one, and while Henrik Lundqvist and Marc-Andre Fleury have similar numbers, New York has the backup of Cam Talbot who has been more than competent compared to Pittsburgh’s Thomas Greiss.

The Wild Card: Pittsburgh has not been good down the stretch, due in part to injuries to essential defensive players like Kris Letang, Christian Ehrhoff, and Olli Maatta. They’re visibly frustrated and struggling with scoring lately.

My Pick: Every part of me that roots for Pittsburgh revolts against this, but New York are going to win this series unless something radical happens in Pittsburgh.

The Numbers: Washington scores fewer goals than New York, but also allow fewer. Their possession is about the same, and the season series was tied at 2. New York’s PDO is at 993, so perhaps they’ve been a bit unlucky, but it’s hard to say.

The Wild Card: Washington’s powerplay is the best in the league at 25%, and New York the worst penalty kill of any playoff team. If they let Washington get any powerplay time, they could be in big trouble.

My Pick: Washington’s two wins came at home, which is why I’m going to pick them in this series, since they have home ice advantage.

I don’t see much point going into my picks later on since they could be totally wrong, but it’s worth noting that last year the LA Kings had the highest possession numbers with a PDO of 1000. This year, the team with the best possession at 1000 is Detroit, and the playoff team with the best possession is Chicago. And while we point to PDO and say it should indicate that a team will regress, Boston in 2011 and Chicago in 2013 boasted ridiculously high regular season PDOs before going on to win the Cup. So much of the playoffs is a crapshoot. I’m probably wrong about everything once again, but at least I have genuine reasons for picking what I did, unlike in past years. I hate to join the crowd of people saying that this year is hard to predict, but I think it is, largely thanks to the absence of perennial favorite picks like Boston.

Anyway, if all of this proves to be insanely wrong, I’m just going to hide behind the “I’m a Fine Arts major!” defense. Dammit Jim, I’m a writer, not a statistician.