I have never been much of a sports fan.

I was a figure skating fan from a young age thanks to my mother and thanks to Michelle Kwan, in whom I saw someone who looked like me and excelled at a sport that was exciting and graceful. I took skating lessons for a while and was peripherally aware of hockey because of that (and The Mighty Ducks and Miracle), but I wouldn’t become a passionate fan until many years later.

The Mighty Ducks was also my introduction to Queen, so it was an extremely valuable part of my formative years.

However, the last two places I have lived have coincidentally been near popular sports centers — Madison Square Garden and now Fenway Park — and I have learned that I love being in the center of a passionate sports culture.

Maybe it’s because I grew up in an LA suburb during a time when the team with the most attention was the Lakers, our school gave away Dodgers tickets as a reward for good behavior, and few remembered the Kings existed (I was very young when Gretzky left Los Angeles), but the existence of cities like Boston where they throw themselves so passionately into their teams is something of a novelty to me. I’m not a baseball fan — I’m far more interested in the statistics than the actual sport — but when I leave my apartment and see people in Red Sox sweatshirts and hats filling the street, it feels like there’s something more than location tying the city together. There’s a sense of pride that I might not relate to, but one I can feel. There was a palpable excitement to Fenway during the World Series, and I remember walking around after the Rangers had won a game and listening to the excited chatter of fans who had just come from the game, exhilarated and proud.

Last week, I went to my first Kings game at the Staples Center. It was a Monday night, and they were playing the Montreal Canadiens. I had been to LA Live before, the entertainment area around the Staples Center, though it was a few years ago, to visit the Grammy Museum (and on a side note, that’s worth a visit). When I was last there, I thought LA Live was a cute attempt by Los Angeles to turn the usually desolate downtown area into a destination (though I did kind of dig the outdoor rink they had going).

The Christmas of 2012 I went to skate at the facility where the Kings practice and they had, no joke, a giant light-up Stanley Cup on the ice next to a Santa sleigh.

Of course, between that visit and then, the Kings won a Cup. So when I went to LA Live on a Monday night, I saw throngs of people in Kings and Canadiens jerseys, grabbing beers or eating at the outdoor patios (a major benefit to being in Southern California). Walking around, I could feel the same sense of anticipation and excitement — people thrilled to be going to a game and seeing the team they loved play. The arena was surprisingly full and less surprisingly rowdy.

Maybe it’s just that when I went to MSG and TD Garden, the home team was shut out, or maybe there’s just a near-universal desire to beat the Habs, but the fans at Staples were more enthusiastic than I had previously experienced. Frequent impromptu chants and cheers, including an absolutely absurd attempt at a Budaj chant after the Kings’ second and final goal, echoed around t he arena. People booed when they showed Montreal fans on the jumbotron and yelled abuse at the officials — all of which is standard hockey game fare, of course, but for some reason I didn’t expect so much enthusiasm on a Monday night in March. I suppose I had gone in with a slight bias from my limited experiences at other LA sports games (which, given as I said the Dodgers weren’t particularly good during my childhood, were somewhat less energetic), the reputation of Lakers games being games you go to be seen at, and, it has to be said, the frequent sneers of people when they say, “California has three teams?” as if in disbelief that we could maintain three whole fanbases.

Yeah, bro, California has three teams, and two of them have won Cups in the last ten years.

The Kings have always had their diehards, but since the Kings won their Cup, I have seen an explosion of interest in the admittedly small sample size of my Facebook feed. (I have also learned that a lot of the boys at my high school I mentally put into the ‘skater boys’ category were actually hockey players.) Even some of my family, who tend more towards baseball and football, have taken notice of how the Kings capture the imagination of Los Angeles during their run. The Kings were always better than their eighth seed status implied, but to people who were maybe only casual fans or to people who were just watching the playoffs, it seemed like a Cinderella story, especially since it was their first Cup since being added to the League in 1969. (On a totally separate note, I think it’s interesting that the Kings are the only major league team in Los Angeles that are actually from LA (no, I’m not counting the LA Galaxy), since we stole the Dodgers, the Clippers, and the Lakers from other cities.)

At home, I’ve seen Kings gear at a number of bars around town, the way Boston bars will display pennants from the 2011 Cup run or newspaper articles about the Bruins’ successes. One of the bars has a jersey signed by, if I’m not mistaken, Dean Lombardi. Others — and these are not all “sports” bars, mind — bear playoff pennants as proudly as any watering hole in a more “traditional” hockey market. I guess the point is I believe that hockey can flourish basically anywhere if it’s given the chance. The Kings have slowly been cultivating a passionate fanbase, and it’s evident while watching games, both at Staples and at bars, that there is true love for this team. 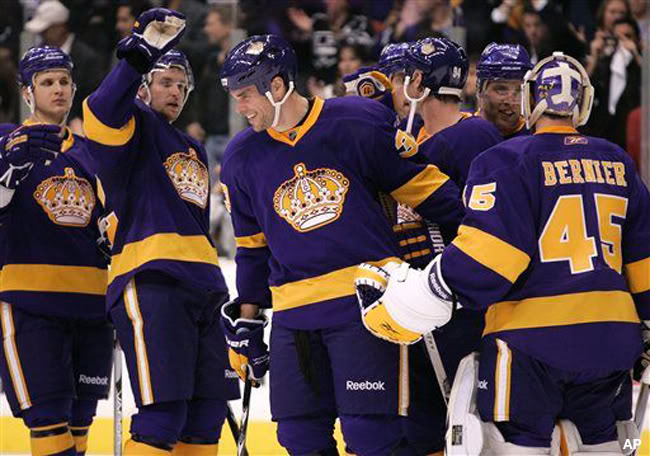 I do kind of wish the Kings would reintroduce some purple and gold to their jerseys because I like when a city has all matching color schemes.

As I’ve said before, I’m glad that LA got an outdoor game this year; it was a great opportunity to show off the hockey culture of a city most people associate more with surfing and celebrities. And it was a great way to show what the NHL has been trying to push: hockey is for everyone, even beach bums who grew up inline skating on The Strand rather than on the frozen ponds of Saskatchewan.