The NHL Awards They Don’t Hand Out

The NHL Awards were on Tuesday night and as usual they were an endearingly terrible mix of awkward athletes, celebrities who all root for the Kings, and the host (this year George Stroumboulopoulos) doing his level best to make the whole affair entertaining.

And while of course the awards handed out are very important and recognize the very best of the sport we love, there are some awards that were not handed out. In the interest of recognizing the wider world of the NHL, we at High Heels and High Sticks would like to award the following trophies

This is a difficult category, as several hockey players have made their mark on Twitter, but there were definitely a few standouts this year.

Ben Scrivens, first of the Kings and then of the Oilers, is a giant nerd who likes listening to TED Talks on planes and playing scrabble. He also has a pretty entertainingly adorable, quirky, and sometimes salty Twitter.

How detailed are stenographer students' notes?

Beau Bennett, who barely played for the Penguins this year but after resurrecting his Twitter, resumed his usual brand of California-themed tweets and the occasional jab at others.

Well deserved Sid, but for the record, I voted @rbontuzzo21 for the Ted Lindsey award #corksoaker

And lastly, Roberto Luongo, who clings to the thinnest of plausible deniabilities with his unverified Twitter account while taking swipes at his team, himself, and the NHL.

Don't think so….."@FlaPanthers: Does Roberto Luongo have the Twitter?”

Whenever a goalie scores in his own net I always laugh cuz I know I could never let that happen to me! #WorldCup2014 pic.twitter.com/8v92P0nQhy

Really, could it go to anyone other than PK Subban? 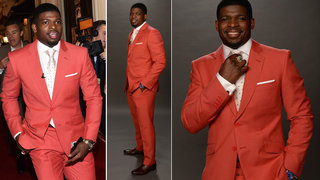 Real men wear colors that might be called pink.

PK Subban rocked a coral suit from Sartorialto the night of the NHL awards in addition to conducting backstage interviews with the winners. Subban is so insanely charismatic that sometimes you have to wonder if all the personality of the other NHL stars has been funneled into him. He could host his own talk show tomorrow and people would watch it.

On a side note, I was watching the NBA draft earlier and I love how those boys dress. I would love if all the draftees, as their first step, was assigned one top prospect of the NHL to dress. I mean, who doesn’t love this look from Adreian Payne? 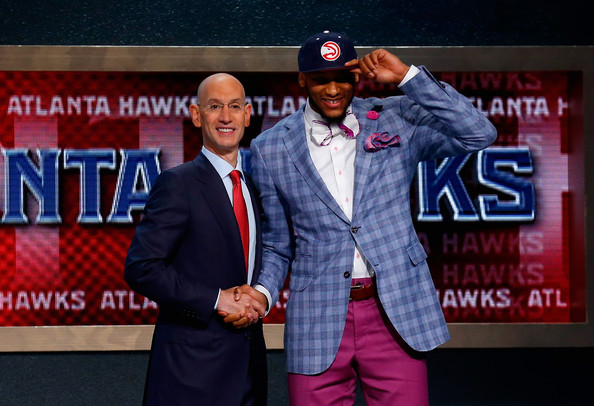 Everything about his outfit is amazing.

Step it up, NHL. Don’t just do the Erik Karlsson and wear a pink shirt; wear pink everything. Don’t do the full plaid, because that’s been done, but dare to be dramatic. Please.

The NHL is full of trolls. From Brendan Gallagher, who reportedly once said “I don’t chirp, I just smile” to Sidney Crosby himself, there are a myriad of ways players can mess with each other.

But no one takes the cake more than Corey Perry, who had two particularly memorable incidents this year.

In fairness to the other teams, I’ve disqualified the Toronto Maple Leafs from this award. The field was wide this year, from the Edmonton Oilers who have been perennial hot messes since 2006 to newcomers in the Pittsburgh Penguins who fired their GM, held onto their coach for a couple more weeks, then fired him after they hired a new GM and then, to cap it off, lost out on two of their top choices for coach.

But can anyone beat the Vancouver Canucks? After a hugely disappointing season that saw John Tortorella try to fight the coach of the Calgary flames, the Canucks jettisoned longtime GM and Tortorella, who, let’s remember, was a brand-new coach with a five year contract. They also ditched Cory Schneider last year in hopes of wooing Roberto Luongo back into the fold, and then ended up trading Luongo to Florida anyway. In the words of Luongo himself…

Quote of the Year

The most illustrious award, clearly, and who could it go to other than Joe Thornton? That’s it for the awards; tune into the draft tomorrow and keep an eye out for Joshua Ho-Sang, who will probably get one of our awards next year. Happy Draft Day!