Strangest Stories of the 2014 Off-Season

As the season grows ever closer (only a week now!) I’ve had time to reflect on what was, really, kind of a wacky offseason. Lots of movement in both coaches and players, to the point where I genuinely can’t remember who plays for which team anymore. Steve Downie is on the Penguins? Manny Malhotra plays for the Canadiens? Part of this might be due to the fact that I was without functioning internet for about two weeks.

Aside from that, there have been the usual parade of stories that get way more coverage than they probably need to just because it’s the offseason and there’s nothing else to talk about. To celebrate the fact that we’ll have actual games to talk about soon, here are my personal favorite weird stories of the summer, ranked on a scale of 1 to 5 strombones.

The Summer of Analytics

What’s the Deal: This summer, we saw several teams (and media outlets) make the move towards using advanced analytics like CORSI and Fenwick to better evaluate players. This, in and of itself, isn’t particularly odd given that coverage and teams have been trending that way for the past couple of years. What was strange were the teams that adopted it, namely the “what do you mean we’ve been having unsustainably good luck” Toronto Maple Leafs and the “help everything is burning” Edmonton Oilers. And the strangest part of all is that the Oilers hired provocateur-in-chief Tyler Dellow who is best known for being the blogger to expose Colin Campbell, then in charge of supplementary discipline, for nepotism, and for being an absolute troll on twitter in addition to being frequently scathingly critical when it came to the decisions of the Edmonton front office.

Judgement: Overall, I don’t find it weird that teams that keep finding themselves on the outside of the playoffs looking in (especially when their rosters seem to say they should be better) are trying to improve by any means necessary. I do find the Dellow thing kind of weird though. The guy knows his stats, don’t get me wrong. But he did like to yell about how terrible Edmonton management is.

Gary Bettman Dumps Water On Himself

What’s the Deal: The ALS ice bucket challenge was one of the bigger light-hearted stories this summer, not just in sports but in the world at large. The viral fundraising campaign has raised more than $100 million for ALS research and care for ALS patients as well as raising awareness worldwide. Part of the campaign’s success is no doubt due to the fact that everyone wants to make their friends dump ice water on themselves. And Jeremy Jacobs (and some others) was one of those people, leading to this beautiful moment:

This was absolutely the highlight of my summer for several reasons. Number one: Bettman is barefoot and in shorts when I was fairly certain that his suit was stitched on. Number two: he is wearing sunglasses the whole time right up until the rush of water knocks them off. Gary Bettman, the agent K of the NHL’s men in black. Number three: Gary Bettman dumped ice water on himself. He makes a noise I can only describe as a shriek-groan. It’s amazing. It’s hilarious. I burst out laughing in the middle of the street as I watched it.

Judgement: As much as I want to declare this the wackiest event of the summer just because of the shorts, the truth is that basically everyone in the NHL did the ice bucket challenge. Sidney Crosby did it and challenged all the French Canadians on his team. Marc-Andre Fleury did his while wearing a banana suit. Alex Ovechkin mystifyingly challenged Eminem. In the midst of all of that, Gary Bettman participating in a charity-related event isn’t actually that weird. Even if I can never unsee his calves.

The NHL Is Expanding, Maybe

What’s the Deal: For some reason, a bunch of stories about NHL expansion showed up at the end of August, some claiming that the NHL would be expanding to as many as four cities by 2017 (presumably in time for the 100 year anniversary of the NHL). Some of the teams are ones that have been talked about for ages, some are likely, others seem to be pipe dreams. We gave our expansion proposals a month ago. We’re still waiting to hear back from the league, but we have hope.

Judgement: On the surface, it’s not that odd. The conferences are uneven right now and talk of a team in Seattle or Toronto or even Quebec City has been been floating around for a few years, though usually in the past it was centered around potential relocation markets for the Coyotes. What was odd was the piling on of “Well I heard we’re expanding to these markets, so ha!” all seemingly without any real solid information. And then the seemingly endless news cycle while we discussed this non-news, even as the NHL said they weren’t looking to expand in the near future. Basically: 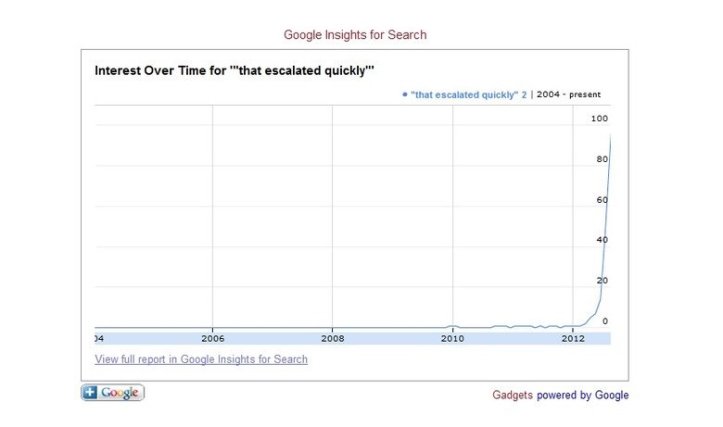 What’s the Deal: In a moment seemingly torn from The Onion or possibly Bob’s Burgers, Claude Giroux was arrested for grabbing the buttocks of an Ottawa police officer. I have to admit I don’t really have anything funny to say about this. It happened. It was weird.

Judgement: Is this weirder than a golf club apparently shattering in his hand last year? Maybe? I mean, at least for this he was apparently drunk. At the same time, I’m beginning to think that Claude Giroux may need a minder in the offseason.

What’s the Deal: In the evening hours leading into June 30th with free agent’s day approaching, Sam Gagner was traded to the Tampa Bay Lightning for Teddy Purcell.

Okay, we all said, I guess that makes sense that he got traded. After all, we know that Edmonton wants to make some changes and this must be the first of it. I wonder how Gagner will do now that he’s in the ea —

And then came the news that no, hold on. Something else was a-cooking. And so we sat and waited to hear what would happen next. Hannah and I privately hoped he might get sent to the Islanders somehow to be with childhood friend John Tavares because then our hockey bromance article that will inevitably get written at some point would be even easier to write.

Then came the news that he had been sent to Arizona along with BJ Crombeen in exchange for a 2015 6th round pick. The Lightning dump some salary, Edmonton makes a half-hearted effort at changing its core, and Arizona gets itself two players for basically nothing.

And yet Tampa fans mourned Gagner’s departure with gems such as these:

Judgement: Okay, from a trade perspective, I guess it wasn’t really all that weird. It all makes sense for the teams. But the way it played out in our age of social media was this weirdly tense scene where we were all hunched over our keyboards waiting to opine on Gagner’s new team. It reminded me of the day Iginla was traded to the Penguins at like 1 a.m. and I sent a few screaming texts at people to WAKE UP THINGS ARE HAPPENING. What a world we live in.

What’s the Deal: By far the strangest story of the offseason was the claimed arrest of Sidney Crosby, coincidentally also in Ottawa, and reported with apparently no oversight by the Ottawa Sun.

According to the article, which has wisely been removed from the internet, Crosby had been arrested in his Porsche, which is where this story begins to sound a little funny, if “Sidney Crosby Arrested” wasn’t a tip off. Sidney Crosby has a meticulously crafted public image, to the point where we know next to nothing about his personal life aside from the fact he bought a big house. Now, he is human, at least as far as I know, and humans make mistakes, but the idea of Crosby driving a Porsche at all seems a little questionable. Naturally this story blew up to the point that it was trending on Facebook. 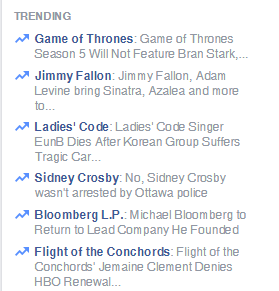 Sidney Crosby, noted party animal, was in fact not even in the country. He was in Vail with his trainer Andy O’Brien and their cabal of NHL players. So unless Crosby really is an alien or a teleporting robot built by Hockey Canada, there is no way the story was true. And yet Crosby not being arrested became a story, just as him “cutting in line” at the DMV was, for no apparent reason, a story last summer. Maybe this will become the annual sign that the season needs to end: a nonsensical story about Crosby doing something nefarious. Next year there’ll probably be a story about him renouncing his Canadian citizenship.

Judgement: How do you even let something like that be published without saying to your writer, “Hey, so, you’ve like. Talked to the police and stuff, right? It’s for sure Sidney Crosby? The Sidney Crosby?”