Weekly Round Up: Bobrovsky’s Back on the Case

Instead of discussing a goal or a fight, let’s discuss the best (also probably silliest) faux-stat in hockey: a Gordie Howe hat trick.

Nomenclature debates aside, I think most people love the whole Gordie Howe hat trick phenomenon. There’s something about it when you realize that the player’s just done that, as we see in this clip:

And here is the fight:

Tarasenko’s having a hell of a year already, which obviously makes all of us here at High Heels and High Sticks feel very smug for predicting him as breakout of the season, though someone pointed out to me that it wasn’t exactly hard to tell that the kid was due for one. Whatever.

Over the summer, the Penguins highlighted Evgeni Malkin’s instagram. What’s great about it is that he has some normal instagram stuff — photos of him cooking or on vacation, and then he has random photos of himself covered in birds or this one, where he is congratulating his almost surrogate father Sergei Gonchar on his 800th point. And, for some reason, he is astride a (kind of small) tiger. I’m assuming the tiger is taxidermied. But who knows? It wouldn’t be the first time Malkin’s gotten up close and personal with a dangerous wild cat.

Milestone of the Week

To the relief of all Columbus Blue Jackets fans, Sergei Bobrovsky returned to the lineup and promptly won his 100th victory, against Antti Niemi and the Sharks. And of course there was a hug:

Ah, the hug. It had been so long, but there it was, so warm.

The Blue Jackets secured a 2-1 victory last night over the San Jose Sharks. The final horn sounded, the cannon fired and a crowd of 15,950 roared. The Jackets scaled the wall in front of their bench and made a queue to congratulate their goaltender, Sergei Bobrovsky. Last in line, per usual, was left wing Nick Foligno, the hugger.

Jackets fans know the ritual after a victory: Foligno flings his arms around Bobrovsky and attempts to crush him.

“I told him before the game,” Bobrovsky said, “I wanted the biggest hug ever.”

“I tried to pick him up, but he’s pretty heavy for a guy who only weighs 150 pounds,” Foligno said. “It’s like lifting a whale. I guess it’s the pads.”

The Boston Blades finished a season sweep of defending Clarkson Cup champions the Toronto Furies. Given they were defeated by the Furies in the playoffs last year, there is no doubt some degree of satisfaction to be gained by the Blades in this.

This is a good excuse to link to a Blades-Furies game if you need something to do tonight:

In not-exactly-women’s-hockey-but-related news, we will have an interview with Lucie Kloak of the UNC club team up later this week. Don’t remember who that is? She is the unnamed player in this tweet:

Rule Call of the Week

Anyone who watched the Penguins-Rangers game on Saturday will remember one thing: that the Rangers won and then lost the game.

The game was initially decided by Dan Boyle, but after all the hugging and celebration by the Rangers and the slow trudge of the Penguins back to the dressing room, the folks in Toronto realized something was wrong: Dan Boyle had touched the puck twice. Sidney Crosby, perhaps realizing something was wrong, came out and gestured his team to return to the bench. And then Brandon Sutter, the guy who once said he’d get a cow tattooed on his chest, almost immediately won the game for the Penguins.

What made this hilarious was that I was at a dinner party and wasn’t watching the game, and when I checked my phone I was like oh hey, the Pens won, and my friend next to me was like what? no they didn’t, and pulled up twitter and then we stared at twitter until we learned what the heck had happened. 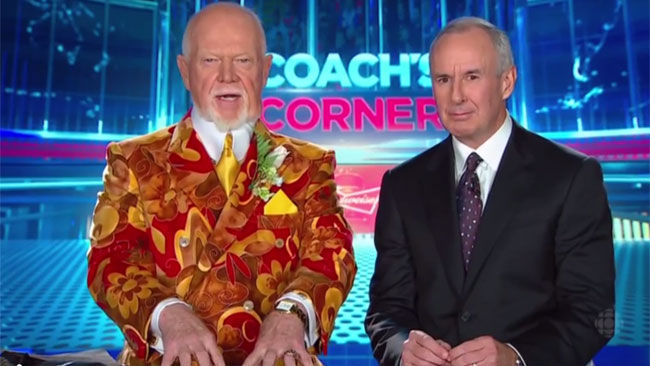 This is more like it. Over the last couple of weeks Don has been distressingly sedate and then he busts out this thing. It almost looks like a lava lamp in its swirling madness. If you stare too long, you’ll wake up on an ugly mustard orange couch while Bob Marley croons from the record player.

The best part is that Cherry didn’t think that suit jacket was enough. No, he thought, looking at it, what it really needs is some accent pieces. A pocket square that almost but doesn’t quite match my tie and an extremely leafy white rose. That’s exactly what it needs. And he was right.

Annoying Debate of the Week

This week, future Hockey Jesus Connor McDavid injured his hand as a side effect of a fight (from what I understand his hand hit the boards).

This has of course led to another round of “fighting or no fighting” and also “should there be no fighting in junior hockey”? with annoying arguments on both sides. I’m the wrong person to ask about this, since part of my entrance into hockey were the fights, but I do like the idea of trying to limit fighting in Junior, and fighting is clearly on a downswing in the NHL. In the next ten years we’ll probably see it drop to the point where fights become abnormal. We’ve already gotten away from the days when it was an expected part of the sport; it’s on the decline.

The Gonchar trade will probably help, if only because Gonchar is in the last years of his career and isn’t what their (weak) defense needs. Jamie Benn needs to get going, too. Right now nothing seems to be working, but then they’re still technically in a rebuild. We have to remember last year’s playoff run was technically ahead of schedule.

Ah…Oilers. Both their goalies are under .900, which is not good, but is that a function of their goalies or the team as a whole? (Given their track record with goalies, I’m leaning toward the second. Hannah suggests the problem may lie with the goalie coach, who was criticized, albeit circumspectly, by the Preds organization when Dubnyk was traded to Nashvill last year.) I’d argue their defense is slightly better than it has been, but it still isn’t good.

I’m genuinely optimistic about the Blue Jackets. They got Bobrovsky back, they’ve won two in a row, and their problem before wasn’t so much scoring as it was keeping the puck out of their own net. Hopefully having Bob back will bring them some confidence and some security in goal so they can dig themselves out of this hole.

Here we are, back where we started. They’ve won 5 games now, but like I said a while ago, it’s hard to come back from 8 losses in a row. As much as it must rankle given the changes they tried to make this past summer, Carolina needs to consider itself in rebuilding mode at this point. They haven’t made the playoffs since 2009, and they seem to be under this impression that they’re still a contender even though no one else really seems to think they are. They have good pieces, but something about it isn’t working and they need to start really making changes starting this year.

What is there to say about the Sabres other than the fact that I kept holding my phone up to my Leafs fan friend on Saturday night and taunting him with the score? The Sabres are terrible. This part of Tank Watch will from now on be an exercise in how many synonyms of terrible I can mine from thesaurus.com.