Weekly Round Up: Everybody Hates the Canucks, Apparently

I remember thinking on Wednesday, Man, I’m gonna have a lot to talk about in this week’s round-up. How am I going to fit anything else in? And then Saturday happened.

With that all in mind, let’s start from what was a big news story but doesn’t, in my opinion, warrant all that much discussion.

10. Yesterday in a move that shocked the world, Canada named Sidney Crosby its captain for the Olympics. Wait, is Crosby the one that scored the gold medal goal last time? Okay, maybe that isn’t such a shock.

Forgive my sarcasm, but one of the most baffling things about this has been the people who think Crosby is undeserving of the title. Crosby was one of the leadership on the 2010 squad, the only one still on the team (Niedermeyer retired; Pronger on LTIR; Iginla not even invited to camp), and is the face of hockey in both Canada and the NHL.

True, Crosby didn’t have the best Olympics last time — that would have been Jonathan Toews, MVP in 2010 and alternate captain for this year — but he scored the goal in overtime to give Canada a gold medal on home ice.

This is the worst picture in the entire world.

Canada has six current NHL captains, three more former captains, and five current alternate captains, so they had a pretty big leadership pool to choose from. With Toews, Weber, and Crosby all being long-time captains (Toews is the newest of the three, having been captain of the Blackhawks since July 2008) and also members of 2010’s gold-medal winning squad, it seems pretty logical to me.

9. The Oilers made some interesting trade decisions this week, dropping young goalie Devan Dubnyk in exchange for Nashville’s Matt Hendricks and then going after LA’s back-up Ben Scrivens.

I want to take this moment to say that I love Ben Scrivens. He’s a Cornell grad, undrafted, listens to TED Talks while traveling, and tweets about playing Scrabble. I hope Edmonton doesn’t destroy him.

In the meantime, I don’t think any of this is going to save the Oilers’ season, which can be summed  up in one image for me:

That’s two number one overall draft picks and one first pairing defenseman in there. (source)

8. Steven Stamkos is not a human being. Six months, they said. Six months to get over an injury of that magnitude. Well, it’s been two and the kid is skating with his team. Quick, someone give him a direct order!

7. TSN in Canada has been doing this very interesting series called Reorientation, which deals with the issues of being a gay or bisexual-identified male athlete in our current sports society. There are some interesting interviews with, among others, Robbie Rogers, Chris Kluwe, Gary Bettman, and Dustin Brown and the aforementioned Ben Scrivens. The third part went up this week and it’s definitely worth a watch.

6. As of this week, the Sharks are 17-1-0 in their last eighteen against Washington. I bring this up mostly because I was rooting for a Sharks-Caps final last year (and this year). I really want a final where neither franchise has ever won a Cup. I just feel like the rage and desperation and desire would fuel a really great series.

I mean, I also want a Sharks-Jets final, if only so Hockey Night makes a montage of the two set to West Side Story.

5. Team USA’s goalies Jimmy Howard and Jonathan Quick get into it. And then Jimmy Howard blatantly lied about it:

4. I was working during the San Jose-Tampa game, which looks like it was absolute madness. I even got an update from Game Center on my phone telling me about Marty St. Louis’s natural hat trick, and then Joe Pavelski gets one too. On a related note, Marty St. Louis is one of those people who you just look at and feel bad about yourself. He’s 38 years old, tiny, won the Art Ross last year, and scored a “dick trick” against the team whose captain led to the coining of that phrase.

3. Hannah desperately wants me to talk about this picture but I think I’m gonna let it speak for itself.

Hey girl, I bet I can score on you.

2. The Vancouver Canucks did not have a good week. First, they have a nasty, contentious game with the LA Kings. Then they go to Anaheim and this happens.

For me, hands-down the best part of the night was the Vancouver Canucks twitter slowly losing its mind, particularly late in the third period when everything went to crap and resulted in a seven minute 5-on-3 powerplay. Even the Ducks were looking demoralized. Teemu Selanne didn’t even want to score that goal. Bruce Boudreau sent out his fourth line in attempt to mitigate the embarrassment. And still the game ended 9-1. But the worse was yet to come…

1. …which brings me to the Canucks-Calgary game from Saturday which saw 142 penalty minutes handed out in the first 2 seconds of the game and around 200 total in the entire game. This would have been mostly whatever — that doesn’t even come halfway to beating the record of 419 penalty minutes in one game, held by this 2004 Senators-Flyers match up — except that then John Tortorella, coach of the Canucks and notorious hothead, went over to the visitor’s locker room during the first intermission to scream at Bob Hartley for starting his fourth line. The scene basically looked like that bar fight you saw last weekend, where the drunk dude from the corner decided to challenge everyone to a fight. 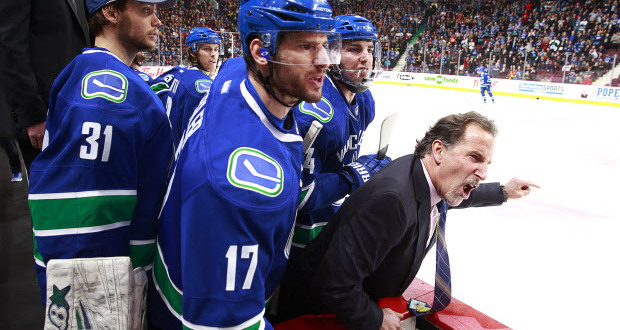 Eddie Lack (far left) is clearly in his happy place far, far away from this madness.

He nearly got into it with Clint Malarchuk, of all people, who was 100% done. Tortorella has a hearing with the league today for his actions, which was inevitable given how much this has blown up.

Now, I like a good hockey scrap as much as the next person, but it can’t be denied that this kind of thing is bad for the game. This is what most people think of when they think of hockey: players and coaches abandoning the game to knock each other’s teeth out. Players climbing into the stands to fight fans. And it obscures a lot of the other things that makes hockey great.

On a final note, it seems safe to say that the Canucks probably have the most blood rivals of any team in the league. They got Boston, Chicago, San Jose, Los Angeles, Calgary, possibly the Ducks now…can they be on next year’s 24/7? Please?