As of this posting, there are six items in the NHL Store when you search for the California Golden Seals. One is a hat. Another is a puck. The rest are things that you apparently need to take care of your hats. This, my friends, is a tragedy. 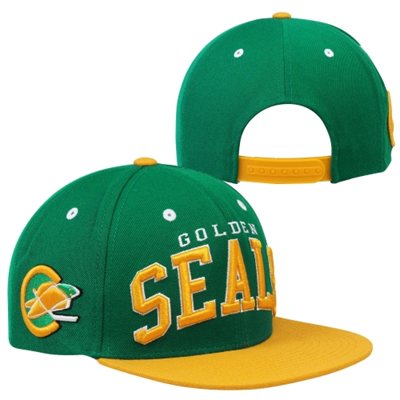 They didn’t even use the good colors.

I said the name California Golden Seals to my friend the other day and she stared at me in blank incomprehension, which is a real shame because they had some really amazing color schemes. From the wiki:

Obviously the one involving pacific teal is the best, because anything involving teal is the best. The teal torch has been passed to the Golden Seals’ spiritual successor, the San Jose Sharks, and they definitely wear it well.

I’m told there is an actual human man underneath that beard.

The Golden Seals fare better than the New York Americans and the Kansas City Scouts, though weirdly the Colorado Rockies, which is what KCS became for six years, have a decent selection. Do people wear Rockies stuff to Devils games ever? Or do they wear them to Avalanche games? I know from experience that plenty of people wear Nordiques gear to Avs games, but then they had actual franchise players of note that were originally drafted to Quebec and then played in Colorado. On a side note, if anyone has +$100 to drop, I am in love with this hoodie and my birthday is coming up soonish.

(For some reason, in the Vintage Hockey section there is also a selection for the Detroit Falcons, an affiliate team in the 90s, and the one item is listed as being a Detroit Stars hat, and the Stars were a baseball team. I’m so confused.)

Anyway, the point is that I understand why the Whalers and the Nordiques and the North Stars have plenty of merchandise available. All three are franchises that are still existing today (Carolina, Colorado, and Dallas, respectively) and ones where the fanbase was sad to see them go. The Golden Seals, after going through about fifty name changes, moved to Cleveland because they weren’t making money. But whatever, they had jerseys that looked like this:

Everything about this photo is amazing.

(On a side note, I know the Islanders have no plans to rebrand once they move to Brooklyn, but how cool would it be to resurrect the name the Brooklyn Americans? If Montreal can have les Canadiens (not to mention Vancouver with the Canucks), we can have the Americans.)

Back to the Golden Seals. I would love to be able to rep some more CA gear — I have a Kings beanie and a throwback Ducks jersey, and I’ll find a Sharks item I like at some point — not so much because I love the teams (although I respect them a lot and enjoy watching them when LA isn’t doing its boring defense/can’t score thing) but because I am fiercely defensive of California’s right to have hockey. Heck, in the next stage of expansion we all suspect is coming, why not add Oakland in addition to the probably inevitable Seattle? Okay, there are probably plenty of reasons not to have a team in Oakland, but you know what, people who always scoff at the idea of California having three hockey teams, how could they possibly have four? The population of California is bigger than all of Canada. So take that, Canada, and let’s #makeitfour.