The Clarkson Cup is over and the Toronto Furies have taken home their first Clarkson Cup which probably means there’s more parity in the CWHL than the NHL.

There were a few returns of note this week, from Patrick Roy returning to the franchise he stormed out on to former captains Rick Nash and Zach Parise returning to play their former teams. Both left in the summer of 2012, Nash in a trade after growing discouraged by the direction the Blue Jackets were taking, Parise leaving for Minnesota after taking his team to the Stanley Cup Final against the LA Kings. I had my suspicions about the receptions they would receive. Both were first round draft picks (in Nash’s case, first overall) that were with their teams for many years before leaving and were both very popular players with their franchise. The trade for Nash and Parise leaving as a free agent were both devastating in their own ways. 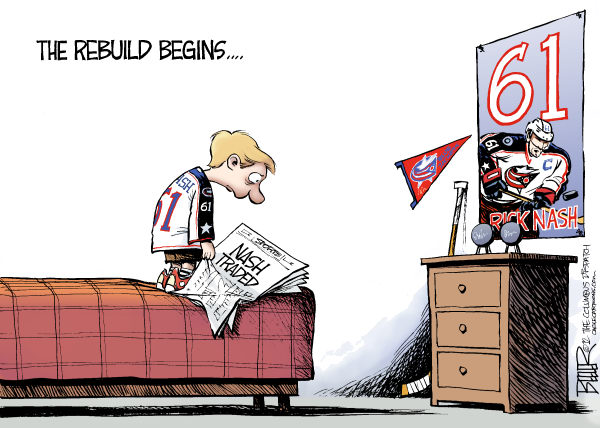 Amazing cartoon by Nate Beeler of The Columbus Dispatch.

My suspicions going in were that Rick Nash would be welcomed back with open arms, Zach Parise would get booed, Montreal…would mostly ignore that he was there. They’ve already done the welcome back thing and retired his jersey so him there as a coach is kind of whatever. Guess what? I was right.

Rick Nash was welcomed back with a video commemorating his time in Columbus, Zach Parise was greeted by angry signs and boos (and reportedly homophobic chants as well, which as Hannah discussed on Friday should absolutely be unacceptable behavior), and Patrick Roy was kind of welcomed but mostly the only people who wouldn’t shut up about it were the TSN announcers on the broadcast I was watching.

After last week’s avalanche of tragedies, it’s nice to have some good news: Canadiens prospect Tim Bozon has woken up after being put into a medically induced coma. He had a case of bacterial meningitis, which reminds me to say now: get vaccinated against meningitis, kids, especially if you’re in college.

PK Subban has one of the best personalities of the game (if you don’t believe me, go watch Sean Avery’s Dancing with the Stars bit. For someone known for his free tongue and being a bad boy he is incredibly boring on that show) and I am incredibly sad that he probably won’t need money after he retires and we won’t get to see him as a color commentator or a panelist on HNIC. (I say HNIC because it would probably make Don Cherry roll over in his restorative coffin.) Anyway, Subban has a video up of him telling Sochi stories and that’s great.

On a related note, Hilary Knight has put up her photos from Sochi in a blog for ESPN. You should definitely follow her on Instagram, by the way, she’s hilarious and gives an interesting look into the life of a women’s hockey player.

Tower of Chobiz. Thank you @chobani for the hookup #yum

6. Edmonton Loses a Skirmish in the Battle of Alberta

On Saturday, Edmonton lost to Calgary — are you ready for this? — 8-1. Yeah. 8-1. Curtis Glencross got a hat trick. Matt Stajan scored a penalty shot and included a sweet tribute to the son he and his wife recently lost. Amongst all this, someone threw an Oilers jersey on the ice again in disgust — and Ben Scrivens threw it back:

The Oilers are free-falling like no one’s business and it’s incredibly annoying to see a team that had three first overall picks in a row fail repeatedly. And they keep clinging to their young kids — Gagner, Eberle, Hall, Yakupov — while making them the target of trade rumors (Gagner) and bringing down the value of their assets (Yakupov) and not making any bold choices towards change except in goal. But getting a goalie that can save your ass like Scrivens doesn’t help if you let him get peppered with shots (more on that later). If the Oilers don’t make a big trade this summer, they’re idiots.

5. The Columbus Cottonmouths Are Incredibly Charming

Before Shannon Szabados signed with them, I had never heard of this team but the more I learn the more charmed I am. (On a side note there is a good article about Szabados here.) First of all there are the antics that Szabados gets up to with her roommate:

Today I witnessed @ShannonSzabados leave her phone in the freezer at a grocery store. She thought she lost it for a while. #snakes

And then there’s their goalie Andrew Lowen doing The Wobble during intermission in full goalie gear:

UPDATE: in the video of the goalie doing “The Wobble”, the woman in the back in the AMOS jersey is the team’s owner. http://t.co/z87cCa83zq

I propose we add this to the next All-Star Game: Goalie Dance Off. I want to see Price, Lundqvist, and Rask throw down.

The Bruins and the Blues have officially clinched. Despite this handy site saying that others are also guaranteed in, the NHL says these are the only two. The Bruins have won twelve straight and look to be the Eastern team going to the conference final once again unless some team works their opposing dark magic against Tuukka Rask. Which brings me to…

The season is rapidly coming to a close (holy crap how?) and it’s time to start a) speculating about playoff match-ups and b) figuring out who the hell you’re going to root for if your team doesn’t make it (more on this at a later date).

According to ESPN NHL, current match-ups in the east would be: Toronto-Boston (which would be amazing especially if it got pushed to 7 games again), Tampa-Montreal (which could be fun if Stamkos is in full-on sniper mode), Pittsburgh-Detroit (which is so much better than the possibility of Pittsburgh-Philly although from an entertainment standpoint the latter would be better), and Philadelphia-New York (which would certainly be interesting).  In the west they would be: San Jose-Minnesota (I’m not sure what to say about this. Something about Danny Heatley?), Anaheim-Los Angeles (PLEASE HOCKEY GODS GIVE US THIS), St. Louis-Phoenix (neglected Olympic goaltenders face off) and Chicago-Colorado (and I will take this moment to remind everyone that second-to-last place Colorado broke Chicago’s “streak” last year).

There are plenty of teams still in the point, most notably Washington (1 point out), Columbus (2 points out), Dallas (2 points out), and Vancouver (3 points out). So who do you root for? What gives you home ice advantage? No fear! I’ll pimp out this site again because it’s totally awesome and it has a tool at the bottom for telling you what result you should want.

Because I work on Saturdays, I wasn’t able to watch the Blades face off against the Furies while defending their title only to fall to the Furies in overtime. Reportedly the game will be aired on TSN tonight so possibly I’ll get to watch it but in the meantime:

Congratulations to the Toronto Furies who defeated the Boston Blades team on Saturday and won the Clarkson Cup!! pic.twitter.com/wvlXEg1zKf

Congratulations to the Furies!

From Randy Carlyle saying Reimer was just “okay” to Toronto fans harassing his wife on Twitter, James Reimer is not having a good week. Reimer hasn’t had the best season, but given how atrocious the Leafs are in front of him and Bernier, it’s honestly still a minor miracle to me that the Leafs are in a playoff position. The Leafs are stripping away what confidence this kid has. It’s a damn shame, especially given how beloved he was last year. An eloquent summary of the situation:

I laughed. I cried. I am out of tears. RT @blogesalming New Bloge Salming Video: Number One – https://t.co/CM9yAUkq58

I possibly had too much fun with this.

An alternative injury ranking through 70 games: Number of times "healthy", i.e. no injury absences (with one caveat) pic.twitter.com/ApZzQOMUoi