Hockey Devotion: On Religion and Sports

Yesterday, on Easter Sunday, the Boston Globe published a piece on religion in the NHL. Or, to be more precise, on Christianity in the NHL, and especially in comparison with the Big Three (let’s be honest here: the NHL is the redheaded stepchild of major league sports in the US). In the article, a few players espouse the belief that the league doesn’t do enough to support its devout Christian players and that they feel uncomfortable being openly religious.

I’m not particularly interested in going after Amalie Benjamin, whom I like (and who is apparently Jewish, which explains why she said she hadn’t realized the article was going up on Easter), but I do want to talk a little about the questions about religion and sports that the article raises. I’ve gone into it a bit (a lot) on Twitter, but we have this blog for a reason, after all. 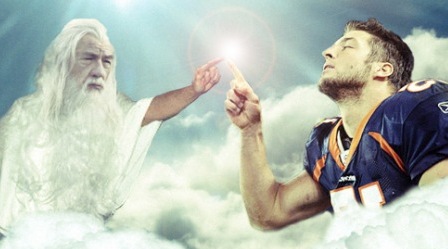 This picture has nothing to do with anything, but I found it on accident and started laughing hysterically. Enjoy.

In the interest of full disclosure: Hannah is Christian, Tasha is Jewish, and I was raised decidedly secular, though nominally Christian, with the occasional visit to the Buddhist temple on New Year’s. Hannah says she has never perceived Christian NHL players as being persecuted or unsupported; I, for my part, didn’t think it was a secret that a number of players are quite religious. All you need to do is watch the camera pan during the national anthems at games to see players kissing crosses, which could, I suppose, be a superstition thing (although that also raises the question of where the line between religious practice and superstition is — but this isn’t a theology article), but then there are also enough articles where players mention God or prayers that you get the sense that hockey players are no more or less devout than other athletes.

The article I found this in is entirely in Russian so for all I know he’s kissing a tiny replica of the Deathly Hallows necklace, but it seemed like a good illustration.

I don’t have an objection to religion. I also don’t think it belongs in sports the way players like Adam McQuaid and Shane Doan apparently believe it does. I’ll be honest: because I’m not religious, I find it hard to identify with heavily outwardly religious personalities like, say, Tim Tebow. At the same time, I don’t particularly mind that he’s overtly religious. I do mind that in the NBA, all teams hold chapel services before games. I do mind, to some degree, that some NHL teams have chapels — mostly because there is no indication in the article that these religious offerings are geared to anyone besides Christians.

The players interviewed claim they sometimes feel isolated because of their faith. Now imagine being an NBA player who is Buddhist or an atheist or Jewish and either having to attend or having to sit out these chapel services before every single game. It’s unclear whether these are interfaith services — I should hope they would be — but that still feels uncomfortable for people who don’t practice or whose religions aren’t addressed in these services. The very idea that this sort of accommodation would be explicitly offered to Christian athletes, with no mention of other religions, is one of the things that had me scratching my head.

Nazem Kadri is a practicing Muslim and has talked, on occasion, about how difficult it is to remain observant while playing in the NHL. He even manages to observe Ramadan, all apparently without structural support from his team:

Kadri said he tries to observe religious holidays, although it is a challenge to fast or pray five times a day during the season.

“That’s probably the hardest part, especially with Ramadan; it changes every year so it’s not always at the same time,” he said. “When you’re playing and you have to fast at the same time, it’s challenging.” [source]

Nail Yakupov, also Muslim, though seemingly less observant than Kadri, had to field questions about whether being Muslim would affect his performance. A quick google turns up nothing about whether the handful of Jewish players in the league keep kosher or not, but I’d imagine that would be a difficulty as well. I’m willing to believe that these sorts of hurdles appear on occasion for devout Christian players, but the fact remains that what the Globe’s article pointed out was that there is more structural support than you’d expect in many teams — specifically for Christians.

Does anyone else remember when this photo of Yakupov praying was a Big Deal?

Peter Chiarelli’s stance on the matter falls in place with mine: if someone asks for help, the team will offer it, but otherwise they can find their own way. I live in Boston; from my apartment I can see two churches. A third is less than two blocks away. And while some forms of Christianity are certainly more rigorous than others, I find it hard to sympathize with players who think they should be given chaplains by their team when Kadri manages to practice a month-long fast (which includes not drinking water) without complaining.

All of which is to say: I think it’s good that the NHL is a secular entity (for the most part; they are decidedly Christian in how they tend to celebrate holidays, for example). I don’t even disagree with a team offering religious resources to their players, so long as they are equal about it. But the idea that being openly Christian makes it hard to be a hockey player is tough to swallow when Christianity is the dominant religion in North America.

At the end of the day, I think one thing that has gone unsaid in the debate over this article is that for many people, sports are religion. There is no separating the two. In terms of ritual, superstitions, belief, they are tied to people’s lives. Perhaps not coincidentally, a fair number of sports fans are religious, but as in anything, that means there are also plenty of people for whom sport is their only religion. The idea that sports and religion are incompatible to me seems absurd just because they are so entwined, both in how we as fans interact with sports and how players interact with religion. By all means,  facilitate players’ beliefs so they are able to play as well as adhere to their faith; but Christianity is not all there is. Lack of institutionalized Christianity doesn’t mean that faith is a dirty word in the NHL; if anything, it means it’s more inclusive for fans and players of all beliefs.